My husband celebrates his birthday in March, and I get all excited thinking about and planning his birthday cake at least a month early. Usually I decide on the flavor, make the cake, decorate it, and he is happy with whatever it is☺️. This time, though, I thought I’d let him choose the cake he wanted for his big day. And what does he choose? Tres Leches, of course.”. Huh…Tres Leches, the most undecoratable of all cakes?  And here I had this romantic tall layer cake in mind which I would then cover in mint green fondant with gold decorations…hmm😳. Forget fondant, I was pretty sure it would not hold up to buttercream decorations even. And tall layer cake…ya, right!

Tres Leches is one cake I prefer not to make at home. Why, you ask? Because I live in Texas, and all those lovely authentic Mexican restaurants and panaderias (bakeries) here serve amazing Tres Leches cake. And of course, like I mentioned earlier, there is the undecoratability factor when it comes to these cakes. It is just too moist and frail for any decorating, forget stacking and sculpting. 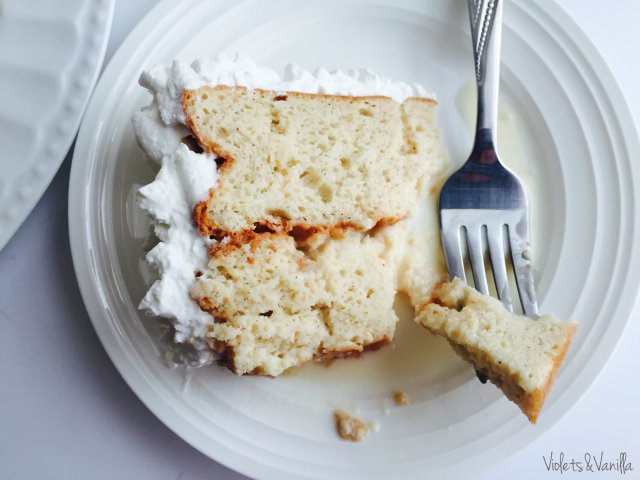 This recipe by the Pioneer Woman is a very popular one and is foolproof. I changed it up a bit by adding a bit of cinnamon to the cake batter and a little rum to the soaking syrup. And instead of baking it in a sheet pan, I decided to try my luck and used three 6-inch pans. The recipe specifies using all but 1 cup of the syrup, but I used all of it. See all that yummy puddles of  ooey gooey goodness..mmmmm! 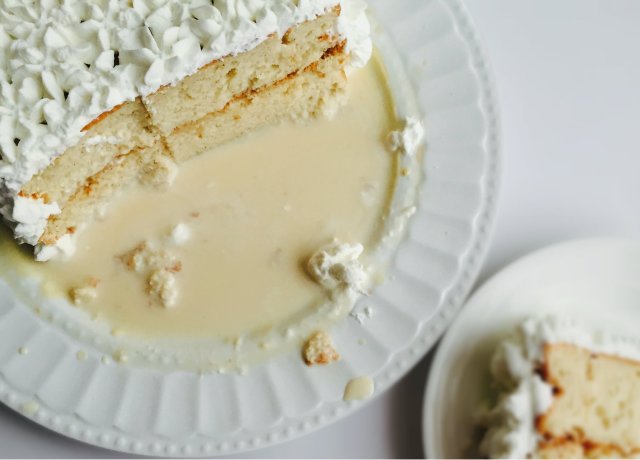 Although the cakes rose well while baking, the sides did shrink once cool. I placed one layer on a plate, poked it with a skewer (works better than a fork) and poured 1/3 of the soaking syrup on top. After waiting for all the syrup to be soaked in, I spread a thin layer of condensed milk on top. I poked the next layer with the skewer before placing it on top of the first layer.  After placing this layer on top, I poured another 1/3 soaking syrup on it. By this time, I knew it could not take another layer on top and I decided to stop with two layers. The cake was chilled in the fridge for a good 4 to 5 hours before decorating it. And since I had absolutely no idea how to decorate it, I simply piped some flowers all over using sweetened whipped cream.

Although quite simple, there is something very sweet and charming about this cake, don’t you think?

Beat egg yolks with 3/4 cup sugar on high speed until yolks are pale yellow. Stir in milk and vanilla. Pour egg yolk mixture over the flour mixture and stir very gently until combined.

Beat egg whites on high speed until soft peaks form. With the mixer on, pour in remaining 1/4 cup sugar and beat until egg whites are stiff but not dry.

Fold egg white mixture into the batter very gently until just combined. Pour into prepared pan and spread to even out the surface.

Bake for 35 to 45 minutes or until a toothpick comes out clean. Turn cake out onto a rimmed platter and allow to cool.

Combine condensed milk, evaporated milk, heavy cream and rum (if using) in a small pitcher. When the cake is cool, pierce the surface with a skewer several times. Slowly drizzle all but about 1 cup of the milk mixture—try to get as much around the edges of the cake as you can.

Allow the cake to absorb the milk mixture for 30 minutes. To ice the cake, whip 1 pint heavy cream with 3 tablespoons of sugar until thick and spreadable.

Spread over the surface of the cake. Chill it in the fridge overnight and serve.

I have been searching high and low for a good pineapple cake recipe for a long time now, only to be disappointed each time. I sure found some very interesting recipes using anywhere from a truckload of ingredients to just two ingredients. The recipes I tried were either not pineapply (that’s a word, right?) enough for me or turned out gummy and mushy. I did not try the 2-ingredients pineapple cake which uses just an Angel food cake mix and a can of crushed pineapples. It is said to yield a surprisingly yummy cake in spite of just the 2 ingredients. Have any of you tried that particular recipe? If you are interested, you can find the recipe here.

Anyway, once I was done experimenting, I decided to just convert a fabulous yellow cake into a pineapple cake by adding crushed pineapples and juice to it, and then amp it up by smothering on a luscious pineapple mousse on top. I was happy with the results….it is very tender and moist, and has a bite from the crushed pineapples. The pineapple mousse couldn’t be easier; just some heavy cream, vanilla pudding mix and pineapple jello mix, and you have a delectable pudding-like mousse that you can eat by the spoonful. Find its strawberry variation here.

Position the rack in the center of your oven. Preheat to 350˚ F. Coat the inside of a 9-inch by 13-inch pan, line bottom with parchment, then spray parchment.

Whisk together flour, baking powder and salt in a medium bowl to combine and aerate; set aside.

In a large bowl with an electric mixer on medium-high speed, beat butter until creamy, about 2 minutes. Add the sugar gradually and beat until very light and fluffy, about 3 minutes, scraping down the bowl once or twice. Beat in vanilla.

Beat in the eggs one at a time, scraping down after each addition, allowing each egg to be absorbed before continuing. Add the flour mixture in four additions, alternating with the milk first and then the juice. Begin and end with the flour mixture and beat briefly until smooth. Fold in the crushed pineapples by hand. Pour batter into the prepared pan.

Bake for about 25 to 30 minutes or until a toothpick shows a few moist crumbs. The cake will have begun to come away from the sides of the pan. Cool on rack for 10 minutes. Unmold, peel off parchment, and place directly on rack to cool completely.

Mix the ingredients together and whip until soft peaks form.

I first heard about this guava cake from my cousin Manju who lives in California. Every three weeks or so we have these long phone conversations where we update each other on stuff that has happened since we last talked. Along with gossips and stories from India and elsewhere, we also talk about food. She is a fantastic cook who also loves baking, and is the one who regularly lets me know about this new recipe in that blog and that cake in this magazine. It was during one of those fun chats that she told me about this Hawaiian cake which was all the rage in California ( this was a while back, and she also gave me the name of the particular bakery, whose name I now forget). She suggested I try this recipe from The Polynesian Kitchen and I promised her I would, soon. I bookmarked the recipe and then, like always, forgot about it. 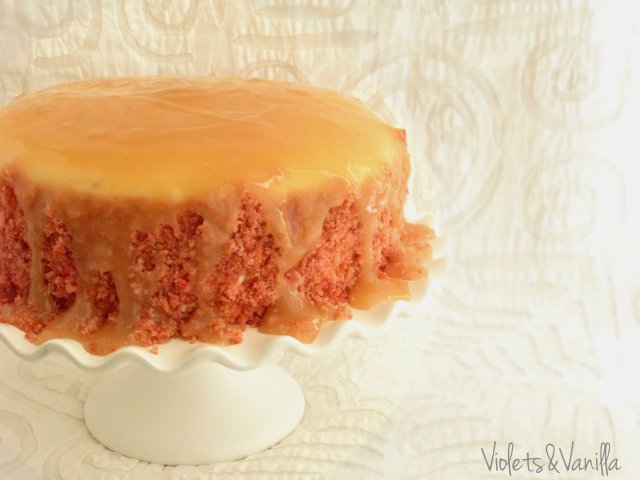 Now, I love guava, both the white ones and the red ones. It was a fruit we regularly enjoyed in India. There used to be two big guava trees in my grandparents’ house and my sister and I would climb up the trees, pluck the big, round, juicy fruits fresh and eat it. It was also used to make juices, jams and jellies. A few weeks back, I came across this guava buttercream crafted by the lovely Bonnie at the awesome blog, Thirsty for Tea. She uses guava paste in her recipe. This reminded me about guava cake, and I decided to make this. Thanks Bonnie!

This is a very exotic, very tasty cake. If you are a guava fan, you will love this one. My only gripe is that it uses a boxed cake mix, which I am not a huge fan of. I enjoy the art of sifting, scooping, and measuring flour, sugar and whatever ( and making a total mess of my kitchen ) so much, that I only use a cake mix when I absolutely have to. You could use either a yellow cake or a strawberry cake mix; I used the latter, which gives it a beautiful pink shade. I took this beauty to a party where it was much admired, loved and gobbled up by everyone. Thanks Manju chechi!

Packing this to Fiesta Friday #28 at The Novice Gardener. 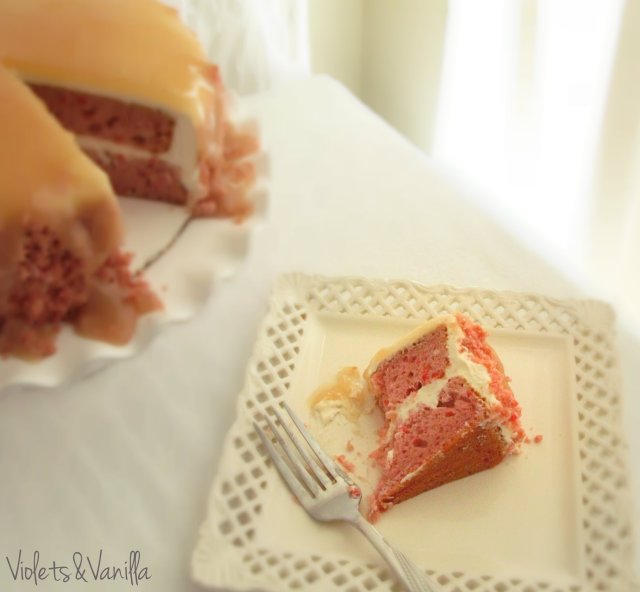 1 C Guava juice, or the amount called for in the cake mix

Bake the cake according to package directions, substituting guava juice for water.

In a medium mixing bowl, beat cream cheese with hand mixer until fluffy. Add sugar and vanilla and beat in.

Slowly fold in the Cool Whip and refrigerate until ready to use.

In a medium sauce pan, bring the 2 cups guava juice and sugar to a boil. Make a paste out of the cornstarch and a small amount of water. Remove guava juice from heat and stir in the cornstarch mixture. Return to heat and bring back to a boil and boil for one minute. Cool in refrigerator.

To assemble: Thickly ice the cake with all of the cream cheese mixture. Glaze the top of the cake with guava gel. Refrigerate until ready to serve.

For me there is no other fruit that evokes the feeling of summer more than a ripe, golden, juicy mango. In my mother tongue, Malayalam, mango is called Mambazham or Maanga. Back in India, as a child, the mango season would be in full swing during our long summer vacations, when we were free and could do as we pleased; no studies, no homework, just playing, roaming around with cousins and friends, eating and sleeping. Sigh! Those were the days. The trees in our backyard and neighbourhood would be filled with mangoes, the fruit and vegetable shops filled with different varieties of mangoes — Neelam, Alphonso, Malgoa, Banganappalli, Priyoor, Karpooram, just to name a few.  And that heady, sweet smell of ripe mangoes…ooh, makes my mouth water just thinking about it.

Our favorite way of eating a mango was just biting off the peel and devouring the sugar-sweet, golden-yellow flesh inside, leaving a very sad and famished-looking pit with not even a trace of yellow on it 🙂 Various dishes were also made with the mangoes; the raw ones used for pickling and curries, and the ripe ones used to make desserts and other sweet treats. The mango, rightfully called the ” King of Fruits ” is high in vitamins A, C and E, and an excellent source of fiber and iron. It is known to fight cancer, keep cholesterol in check, improve digestion and is also good for your eyes, skin and hair. 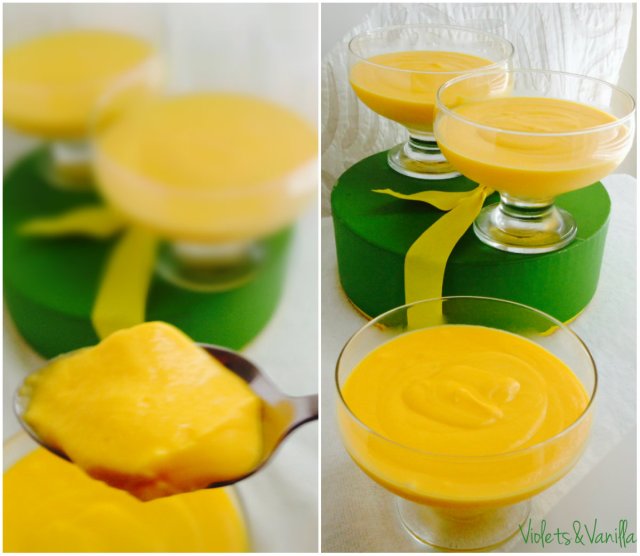 This mousse is very light, sweet, and airy with a pleasant, silky smooth texture. You could use canned mango puree or freshly pureed mango, whichever you have on hand. It is easy to prepare and makes for a gorgeous dessert for your next party. Although the recipe says 4 servings, I easily got almost 7 servings out of it.

In a small saucepan sprinkle the gelatin over 1/4 cup cold water, let it soften for 1 min. Heat the mixture over low heat, stirring, until the gelatin is dissolved.

In a blender blend together the mango puree, the sugar, and the vanilla. Add the gelatin mixture and blend well.

Transfer the mixture to a bowl and stir in the yogurt. In a chilled bowl beat the cream until it holds stiff peaks, fold it into the mango mixture gently but thoroughly. Transfer to individual dessert bowls/ glasses.

Chill the mousses for at least 4 hours or overnight. Garnish with mango slices. 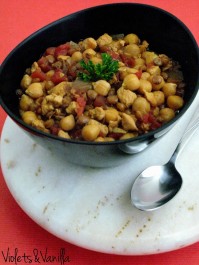 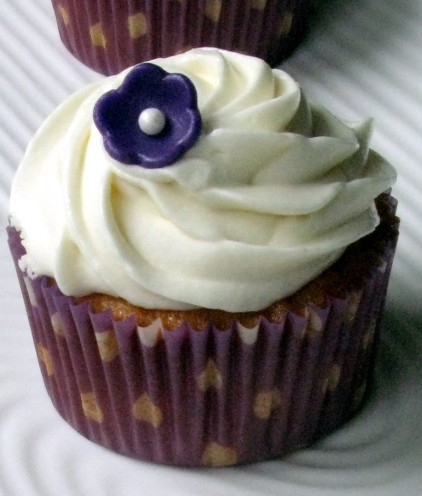 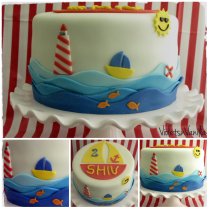